Food is central to our lives, and our lives are becoming increasingly digitized. The amount of data about our food preferences, food preparation and food consumption is growing rapidly. Examples include online recipes, databases of chemical compounds in foods, and restaurant reviews, among many others. How is food consumption changing in the 21st century? How can the new abundance of data help us to study the way we eat food? And how does the availability of this data shape our culinary habits and preferences?

Computational Gastronomy - Food in the Age of Data is a Royal Society International Scientific Seminar that aims to bring together leading researchers and practitioners from the fields of food science, computer science, neuroscience, sociology, and gastronomy to discuss these questions and exchange ideas. Recent research in this field has already shown how crowdsourcing, data mining, large-scale data analysis, machine learning, and network analysis can give us new insights into food choice, suggest novel ingredient combinations, and identify cultural, anthropological, psychological, nutritional and chemical factors that determine which foods we enjoy and why.

We will start around 9am on Monday the 29th and finish around 5-6pm on Tuesday the 30th. You can download the detailed program here: programme.pdf

The Royal Society at Chicheley Hall 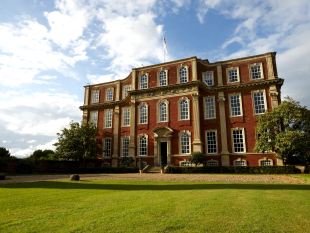 Two nights - the night before (28th) and the next night (29th) are paid for everyone. The night of the second day of the meeting (the 30th) can also be booked free of charge by those travelling from outside the UK. Please let us know if you would like to take advantage of this option.

The closest airports are Luton, Birmingham, Heathrow, and Stansted. More travel information can be found here.

As we have a grant to pay for attendees' travel expenses, it would be very helpful if all attendees could notify us of your travel plans and actual (or estimated) costs as long as possible before the workshop to help us plan effectively. This also allows us to coordinate transfers from airports for people who are arriving at the same airports around the same time.


Harold McGee
Food scientist and author, based in the US - studied chemistry at Caltech and Yale University before writing the highly influential On Food & Cooking: The Science & Lore of the Kitchen, that has become one of the defining books for a whole generation of scientifically-minded chefs. In addition to a number of additional books McGee has published reviews and original research in Nature, as well as contributing to the New York Times and Physics Today among many other publications.
Peter Barham
Professor of Physics, University of Bristol, UK - is a leading scientist in the field of Molecular Gastronomy and has collaborated extensively with Heston Blumenthal. He has also co-authored ‘Molecular Gastronomy: A New Emerging Scientific Discipline.’ (Chemical Reviews, 2010), and is one of the two Editors-in- Chief of the journal Flavour.
Michael Bom Frøst
Sensory Scientist at the Department of Food Science, University of Copenhagen and the Director of the Nordic Food Lab - has ensured that the Nordic Food Lab (founded by the highly regarded restaurant Noma) is at the forefront of pioneering research into new ways to source food sustainably and to identify new sources of edible ingredients.
Jonathan Lake
Head Chef at The Fat Duck restaurant, Bray, Berkshire, UK - has a degree in Physics and Biology and heads the kitchen of one of the leading restaurants in the UK. The Fat Duck is widely known for its scientific approach to cooking and the integration of multi-sensory perception into the restaurant experience.
Dan Jurafsky
Professor of Linguistics and Computer Science, Stanford University, USA - is a leading expert of Natural Language Processing. He is a MacArthur Fellow and studies language of food.
Dana Small
Associate Professor of Psychiatry at Yale University, USA - is a leading expert in neuroscience. She studies neurophysiology of feeding and the neural mechanisms underlying taste and flavor.
Lav Varshney
Professor at the Department of Electrical and Computer Engineering, University of Illinois at Urbana-Champaign, and formerly at IBM - has been studying recipe data on a large scale at IBM Research and is interested in mapping and predicting food ingredient usage patterns.
Ole Mouritsen
Professor of Biophysics at the University of Southern Denmark and Director of the Center for Biomembrane Physics - is a leading figure in the field of Molecular Gastronomy and another co-author of the review paper on this topic in Chemical Reviews.
Rachel Edwards-Stuart
Independent food consultant, based in the UK - holds a degree in biochemistry from the University of Cambridge and a PhD from the University of Nottingham in the Science of Cooking. During her career she has worked as a food scientist for Sainsbury’s, consulted three-Michelin star restaurants on the application of scientific techniques to food, taught Molecular Gastronomy at the Ecole Grégoire Ferrandi and set up the highly successful London Gastronomy Seminars.
Ramus Bro
Professor in the Department of Food Science, University of Copenhagen, Denmark - is an expert in Chemometrics and large-scale data analysis, and led a research project on "Food Informatics: A New Integrated Systems Science".
Pablo Rodriguez
Research and Innovation Director at Telefonica Digital, Adjunct professor, Columbia University, USA - is a prominent computer scientist who leads Telefonica’s research department at Barcelona. He has made significant contributions to various fields of computer science including networks, systems, web, and mobile communications. He has initiated a collaboration with El Bulli Foundation and analysis of food data and organized the GastroTech Days event in Barcelona in 2011, bringing together a wide range of researchers interested in food and data analysis.
Otto Römer
Senior Development Chef at The Fat Duck restaurant, Bray, Berkshire, UK - has a degree in Chemical Engineering and is responsible for researching new techniques, textures and flavour combinations that can be used in a gastronomical context, often in collaboration with scientists in academia and industry.
Ben Reade
Research and Development Chef - has a Bachelor’s degree from the University of Gastronomic Sciences and was until recently Head of Culinary Research and Development at the Nordic Food Lab.
Jens Risbo
Associate Professor in the Department of Food Science, University of Copenhagen, Denmark - is a food scientist interested in flavour perception and flavour chemistry, and another co-author on the review paper of Molecular Gastronomy in Chemical Reviews.
Hyejin Youn
Research Fellow, Mathematical Institute, University of Oxford, UK - is a physicist working on complex networks and statistical physics, with broad interdisciplinary interests. As a postdoctoral fellow at the Santa Fe Institute she investigated the extent to which the complexity and evolution of biological and social systems are governed by similar quantitative principles.
Ben Nijssen
TNO, Rotterdam, The Netherlands - is a scientist at the company TNO, which provides the widely used VCF flavour compound database to the food industry.
Peter Todd
Provost Professor of Cognitive Science, Psycho9logy, and Informatics at Indiana University, Bloomington — is an expert on human decision making. He studies how people search for and choose important resources including food and information.

Sebastian Ahnert
Royal Society University Research Fellow at the Cavendish Laboratory, University of Cambridge, UK - works on the interface of biology and theoretical physics, with a particular interest in network analysis, self-assembling structures, and algorithmic information theory. In 2011 he published a paper bringing network analysis to food science.
Yong-Yeol Ahn
Assistant Professor, School of Informatics and Computing, Indiana University Bloomington, USA - works on data-driven analysis of social & biological systems, and food behaviors. He co-authored the paper on network analysis and food science with Sebastian Ahnert, and published papers on the geography of Chinese cuisines